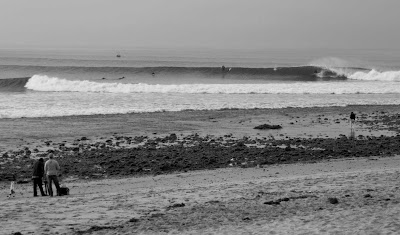 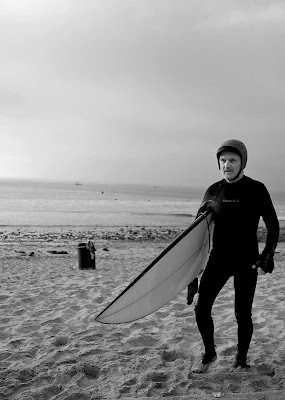 I think it was July of last year when this swell hit. Some of the best waves I've ever seen rolled through during the three days it graced our shores. The first chance I could get to go was a late Friday afternoon, and as I ran past the pit for a darkening session and looked to my right I saw Richard Kenvin, Joel Tudor and their insane, iconic, and inspiring quiver of Simmons, Alaias, Bauguess, and other legendary crafts standing tall and proud in front of the Adamson House.

I was holding my 5'10" 80's quad, which I have had ongoing seven years now but just found out a couple of weeks ago that it was shaped by Gaylord Campbell ( I couldn't decipher the logo). I found the board in the used rack at Kennedy's and because I had always admired the look of those funky stubbie 80's quad's, and since the board was in pristine condition I didn't even hesitate to shell out the $125. Lust at first sight.

After riding my first quad I knew there was something extremely significant going on with the short fat and wide fish shape and also that four fins meant attaining speed with less movement. This was way before I'd seen anybody riding quads. I preached to my friends that quads would be the next big thing without any real evidence besides my own stoke. And, although I wasn't surprised when the dual fin and quad revolution hit, I was a bit mesmerized by just how hard it had struck the chord. Super dudes were riding them in everything from perfect right points to huge left pits. Nathan Fletcher, Danny Fuller, the Mav's crew, Dan Malloy and Daniel Thomson. My thoughts and blabbing became somewhat validated and I continued to ride my fat orange double-wing butt tail quad just about everywhere. To this day it remains one of my all time favorite boards and it has been with me on trips from Big Sur to central Baja and everywhere in between.

When I ran past Tudor and Kenvin that evening I felt a bit of pride for riding what was just a few years ago seen as retro, or just made for fun in mushy waves, but was now being validated as futuristic and relevant thanks to guys like RK, JT, Rasta, and Fletcher. I wanted so badly to run back to my rig and grab my camera so that I could snap off a couple of shots of those two standing in front of that priceless quiver and capture that epic moment. 14 year old Griffin shot the Terry Martin Simmons down the line past the bootie wearing pot bellies, Warmjet and Scott Sullivan grabbed a couple of frames: all hail Simmons and the hydrodynamic planning hull. I surfed until I couldn't surf no more that swell and the bright orange board shaped in '84 held up just fine in 09 on those wondrous walls of 1st and 2nd point. Fellow photographer and kelp aficionado Robert also rides quads, and not because they go good in junk, but because they go great in fast down the line juice. He also doesn't mind riding a shortboard or waiting patiently out the back for the sets.

See you on a bright day in July, out amongst the kelp. 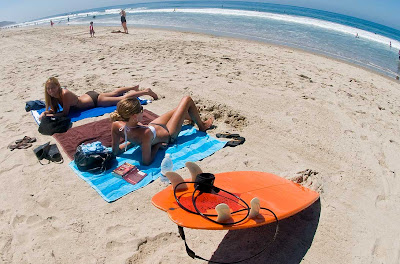 Posted by anthonybphoto@gmail.com at 8:38 PM