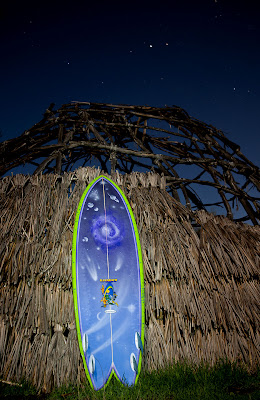 SURFERMAG.COM: Let’s get back to your Speed-Dialer or Quan and explain to the reader why the board has four fins as opposed to a keel fin setup or just two regular wooden (Larry) Gephardt fins on it.

RICH PAVEL: Okay. Let me grab some. [Gets up, grabs fins.] These are the fins I was using and building when I was living in Santa Barbara and it’s the outcome of that influence that I had, Larry Gephardt and stuff. He’s got such beautiful foiled fins, and they float. I wouldn’t put something on your board that doesn’t float. But also I surfed a lot of rocky areas, pretty hard on a set of fins. I liked having this glass bead or halo around it. I kind of resort to that because it was hard for me to have the time and the resources and the energy to stick with the wood fins all the time. So this was kind of a nice compromise. The question was, how do we get to four fins? What you have with the classic keel is a low-aspect ratio fin, and I got spending time with George (Greenough) up there, quite a bit, not heaps, but some time with Greenough, compared to no time is a lot of time [laughs]. That was good, and Stan Pleskunas who was a longtime friend of Greenough’s has also been, in fact that whole family, has been a good influence. The low-aspect ratio fins are kind of like your delta tip fighters: they’re fast and they have good recovery; the high-aspect ratio concept, it’ll hold in much better and for a longer period of time, you can push it a lot further than the low-aspect ratio, but when the high-aspect ratio fails, dude—you’re done. You’re done. Whereas the low-aspect ratio fins, they can be failing and correcting in almost the same moment and literally in the same space. So…


Pavel talking about four fins versus two comparing fins and surfcraft to fighter jets as do many shapers like BJ Hilbers and his Gee-Bee's. Whole Article here

Just waiting for the waves to see if it will fly...
Posted by anthonybphoto@gmail.com at 8:24 AM