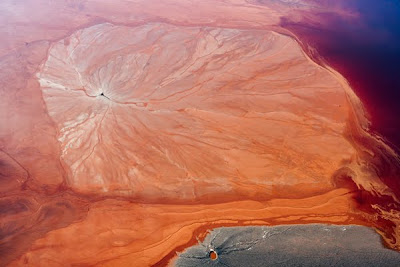 The Day After Tomorrow: Images of our Earth in Crisis takes readers on a journey to bear witness to the environmental destruction that is currently plaguing our planet: From a forest in West Virginia devastated by mountaintop removal mining, to a region in Florida left in ruins by the phosphate mining industry, J Henry Fair presents hard evidence that our unchecked consumerism is leading the way in the destruction of our planet, one natural resource at a time.

Primarily through the use of aerial photography, Fair captures spellbinding vistas of pools of toxic hog waste, streams of paper mill runoff, and the remains of hollowed-out mountains. These environmental abstractions lure the viewer in with unique asymmetrical shapes and striking colors; however, fascination quickly turns to horror, as the viewer realizes what lurks beneath the surface of the image.

Fair is a consummate environmentalist, and after years as a corporate and portrait photographer he turned his lens on the industries that sustain us—oil, fertilizer, coal, and factory farming, to name a few—eager to uncover the dirty little secrets that he knew were well hidden there. It turns out the secrets, and the “dirt” they produce, are far too large to hide. For example: the factory farming industry is responsible for one of the largest environmental disasters in history, wherein a hog waste lagoon burst, causing 25 million gallons of highly toxic sludge to flood the New River in North Carolina, killing ecosystems, animals, and infecting water supplies. Just before Christmas in 2008, the Tennessee Valley Authority power plant was responsible for sending a billion gallons of coal ash waste into the Tennessee River; this spill was 40 times larger than the infamous 1989 Exxon Valdez oil spill. Coal ash is toxic, containing a laundry list of hazardous substances such as uranium, mercury, lead, and arsenic. These are only two examples of the endless calamity we inflict on our environment daily. Now is the time to take action and make change.

More than anything else, The Day After Tomorrow is a call to arms. Our planet dies a little bit every second, and this trend will continue unless we take responsibility. Fair’s images reveal the calamitous effects of our consumer culture’s insatiable appetite for natural resources. Forests are being wiped-out, water supplies polluted and/or drained, animals and humans are dying, but for what? These stunning and tragically beautiful images, in conjunction with a collection of essays by some of America’s leading environmental defenders, provide indisputable evidence that the way we eat, commute, and manufacture is collectively destroying the Earth, and we must change the way we live if we expect our planet to survive.

Image by J Henry Fair and words from Powerhouse Books
Posted by anthonybphoto@gmail.com at 12:12 PM