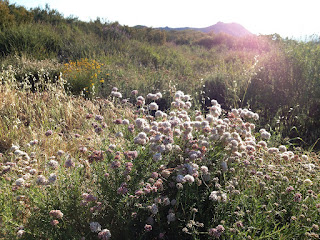 
To understand what makes California flora special, as well as uniquely vulnerable, it is necessary to look far back in time, when similar assemblages of plants and animals occurred throughout Eurasia and North America. The world biological scene started shifting rapidly in the mid-Miocene Period, some 15 million years ago, with the origin and spread of continental glaciation in the Southern Hemisphere. This glaciation, triggered by the impact of tectonic realignments on oceanic currents, was accompanied by spreading aridity on a continental scale and was ultimately followed by widespread glaciation in the north as well.

In the face of these changes to worldwide climate, the hemisphere-spanning flora and fauna gradually became fragmented and were also affected locally by the presence of newly-rising mountain ranges. Only widely separated regions, called Tertiary refugia, still harbor significant representatives of this original biota, and even these have been depleted  differentially over time.

Although China, the United States, and Europe are all about the same size, Europe has 11,500 species of plants, the United States about 18,000, and China about 30,000. more have survived on China, and more have evolved there. For example, the dawn redwood, or Metasequoia, which was the dominant tree in much of western and northern North America 40 million years ago, ultimately vanished from the continent. It is now represented in nature by only about 6,000 trees surviving in south-central China.

Another result of realigned oceanic currents was the formation of Mediterranean climates on the western sides of continents in the world's oceans. In the latitude of the prevailing westerlies, winds coming in over cold currents increased their moisture-holding capacities when they passed onto warm lands. The result was that rain became very limited during the warm part of the year and fell mostly during the cool season. Such Mediterranean climates are unusual on a world scale, occurring in California, southwestern Australia, central Chile, the Cape region of South Africa, and of course the Mediterranean region itself.

The cumulative impact of these changes in California was that many of the species that occurred here until the Early Miocene Period disappeared. As a result, the current flora largely consists of two groups of plants that have had very different origins, each of them contributing to California's special character. The first group consists of tertiary Era survivors, which coped with seasonal aridity because of their unusual adaptations, or because they moved to higher, cooler elevations or became restricted to moist canyons and other habitats similar to the ones that had been widespread earlier.

Shasta snow-wreath (Neviusia cliftonii) is a prime example, restricted to moist canyons in northern California, and with its relatives in the southeastern United States and in Asia. redwoods provide a different example,with their ability to trap moisture from fog that permits them to create their own micro-habitat where a whole group of associated organisms survives.

The second group consists of genera that thrived in the new, summer-dry climate. To such genera, the geologically rapid spread of such a climate made much of California's area functionally like the bare surface of an island emerging from the sea. This situation, in combination with the complex geology and topography, created great opportunities for adaptive radiation, producing tremendous constellations of species in genera such as Phacelia, Erioginum, Trifolium, Ceanothus, and Arctostaphylous.

These unique and fragile ecosystems of relatively  recent origins that occur over much of the state are, then, home to a diverse biota consisting largely of unique species that are often adapted to peculiar local habitats. As a result, the native flora of California is extraordinarily rich, comprising about 5,500 vascular plant species out of the approximately 18,000 found in the United States and Canada as a whole.

More remarkably, 40% are endemic to the California Floristic Province (the part of California that lies west of the Sierra Nevada, plus northern Baja California and southwestern Oregon). this makes California the biologically distinctive and endlessly interesting place that it is. Unfortunately we are rapidly losing that richness today as human beings and fragile nature collide ever more forcefully.

A main threat to California is of course, habitat loss to development, which is getting worse all the time as the population continues to increase. California's population of over 30 million people is growing rapidly towards 40 million, with 60 million predicted by the middle of the 21st century. When queried, most residents say they want a comfortable house and affluent lifestyle that takes for granted a level of consumption considered very high by world standards. Adding up these individual dreams and desires and multiplying them by the growing numbers of people in the state provides an environmental scenario in which sustainability will be increasingly difficult to achieve.

To make matters worse, California's biodiversity is being eroded by a tidal wave of invasive species from other parts of the world. Many of the worst plant pests have come from those areas that have a similar Mediterranean climate, and a majority of them were brought t California deliberately. Bruce Babit, then Secretary of the Interior, noted in 1998, "The invasion of noxious alien species wreaks a level of havoc on America's environment and economy that is matched only by floods, earthquakes, mudslides, hurricanes, and wildfire."

Today it' virtually impossible to imagine how the fragile ecosystems looked that greeted Father Junipero Serra and his companions when they reached what is now the southern harbor of San Diego County in 1769 and continued northward, founding missions along the way. On their horses, in their clothes, and among their supplies were the first seeds of Medicago, Erodium, Avena, Bromus, Hordeum, and many other Eurasian plants have subsequently come to dominate the grasslands of California.

We might imagine something like what Elizabeth McClintock and I saw in Corral Hollow in the early spring of 1949, which was a fantastic wildflower year. There were sheets of wildflowers coming down the sides of the canyons, with relatively few adventives (introduced and not yet naturalized plants) among them. Perhaps such a scene provides a clue to what pre-European California would have been like, but we simply cannot know with any degree of certainty.

Whatever California looked like in 1769 changed drastically in an amazingly short period of time, and many of us have witnessed a similar period of rapid habitat loss during our own lifetimes. During the 1940s when I was a small boy, I remember when our family used to drive down to visit relatives near San Juan Bautista and Hollister, in northern San Benito County.

On the three-and-a-half-hour drive from San Francisco through the orchards around San Jose we passed beautiful flats, vernal pools filled with colorful patches of Downingia and Lasthenia, and other specialized habitats, some saline, some serpentine, some wooded-but all fascinating biologically. The University of Santa Clara had been in the area since 1851, but Silicon Valley was still unimaginable, something for the distant future. Downingia was still present on the Stanford campus until the 1940s.

Particularly since 1945, however, the natural communities of the Bay Area have deteriorated rapidly, and biological diversity has decreased at an ever-increasing rate as invasive plants spread and housing developmets exploded. The meadowlarks have moved farther back into the hills, and something important is clearly being lost. And global warming, projected to increase mean temperatures by more than 3 degrees Celsius by the middle of the century, will displace many habitats and lead to extirpation of many species unless we can achieve major changes in our industrial activities, starting immediately.
Posted by anthonybphoto@gmail.com at 4:59 PM