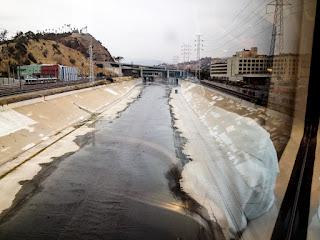 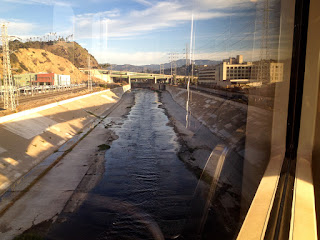 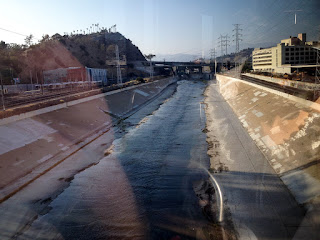 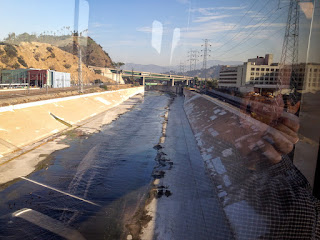 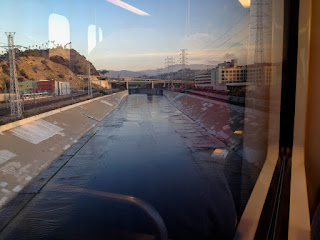 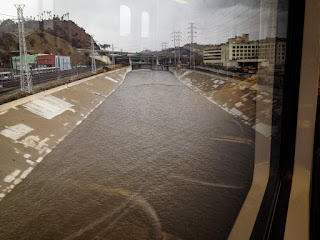 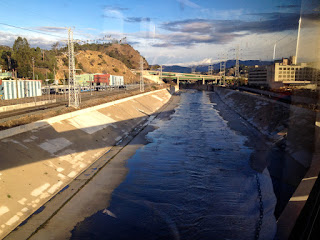 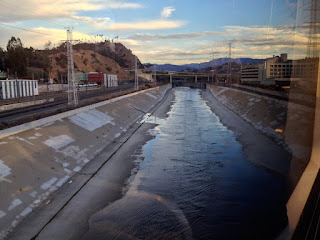 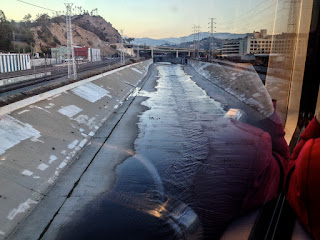 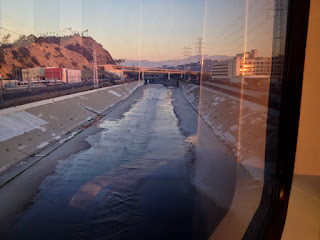 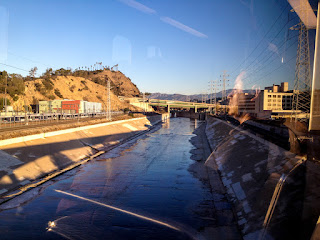 A rain year over the Los Angeles River as seen from the Metro Gold Line from roughly October 2013- October 2014. I've been meaning to post this for a bit now, and as it seems we may be entering into a significant rain year, I thought I would finally share these. When I started this project a couple of years ago I thought about capturing the river from the beginning of the rain year until the complete end of it, and today this is how the National Weather Service measures an official rain year in California. However, it wasn't until just recently that they started to measure a rain year this way. Before, and for the last 130 years, they measured from June to July, they made the change to be aligned with the other water agencies in the state as covered here in the LA Times. And of course it makes sense to measure a rain year in Southern California this way, as we receive almost all of our precipitation from December-February.

As we now know, the 2013-2014 rain year was almost non-existent, and therefore dashed my hopes to continue this project into the 2014-2015 season, mainly because I was concerned that I would again not capture much change in the amount of water flowing in the river below. And that turned out to be the case again. That and my new commuting pattern put me on the train later down the line closer to downtown where it was much more difficult to procure a good seat with the right view.

Even with the very small amount of rain that fell during my trips through Fall 2013- Fall 2014 I still was happy to keep a visual memory of the changing seasons. As subtle as those changes were I still was able to watch the light shift and occasionally the water too.  Where the Gold Line crosses the river as the train heads southbound towards downtown I was privy to some great views of the river, with the Elysian hills, Northeast LA, and the San Gabriels filling the frame. This is where I would record the changes in the river for an entire year using my camera phone. To get these images I had to be sure and hop on the train early, and at the stations located further east to avoid the rush hour crowds so that I could land a prime seat with a nice view. Therefore most of these images were taken early in the morning, sometimes just as the sun was starting to rise. Fortunately I did roll over one big storm, I believe it came on the 1st of March. Finally then, I got to see the river swollen with the run off of the dozens of neighborhoods all across the Valley and LA whose storm water is channeled directly into the river. For once I got to see the river really come to life, I captured a brief glimpse as the train slid by where I could feel the power rushing beneath as all that water was heading straight for the coast. This would be the only time I would get to see the river like this for the entire observing period.

One thing I didn't really anticipate, but was more than content to discover, was capturing other Metro riders reflections in the images too. Looking over them now it makes me think about these everyday passengers going to work and how they felt about this view and the river. Of course, at that time of day as most people were still waking up and off to work the myriad of jobs that keep the city ticking and food on their tables, it seemed as most riders payed little attention to the river at all. Probably, because no one had ever showed them what was there. Hopefully, due to the tireless work from folks like FOLAR that's a thing of the past, and more and more people will look out, dream about the river's future, or just enjoy the view. We all hope the river gets revitalized and will be transformed in many ways that will benefit all Angelenos and the wildlife too. There's so much possibility, and many great ideas out there, but it will be many years until it really starts to look much different. So for now, every time I cross over the river I'll just enjoy a view that encompasses a semi-wild chunk of LA with Elysian Park and the steep hills, the river below spilling out towards Long Beach just after its confluence with the Arroyo Seco upstream, and the water below too, where I scan for birds like the Black-necked Stilts that like to lurk below in these parts, at other times of the year I'll look for swallows and swifts as they migrate through. I love the old bridges too, especially the Broadway Bridge with its classic feel and look.

One day you may see trees on the banks of the river here, with a bike path below, people milling about and a pedestrian bridge connecting the two sides. And maybe even the train operator will come on the intercom, and describe the scene and say something like; 'and here we go across the beautiful LA River, flowing at so many cubic feet another 31 miles to the port of Long Beach, and that's the Steellhead Trout fish ladder you see below, with a flock of Cliff Swallows nesting under the bridge..." For now, I'll just enjoy my view and my own private narration of the scene in my wandering mind.

Posted by anthonybphoto@gmail.com at 8:04 PM