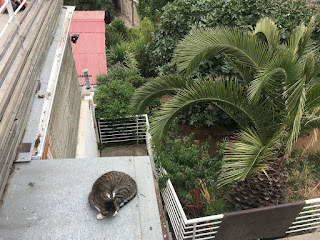 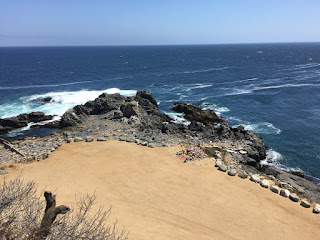 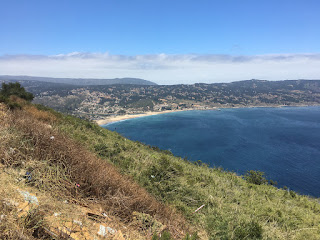 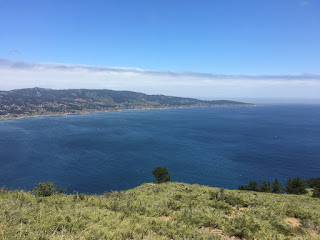 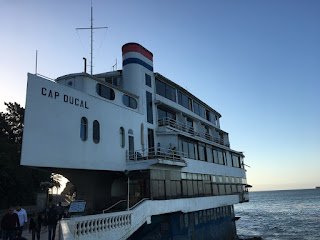 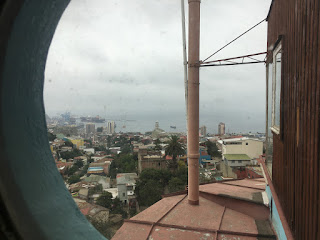 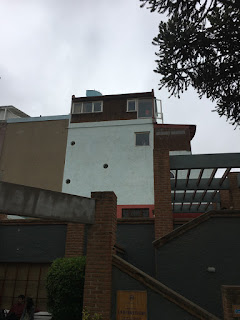 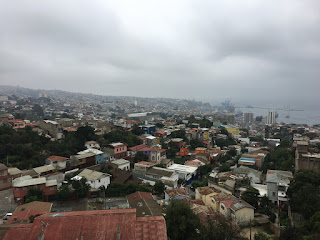 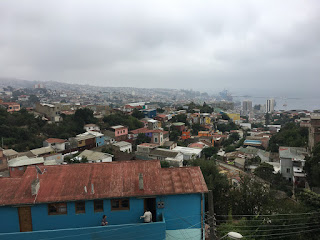 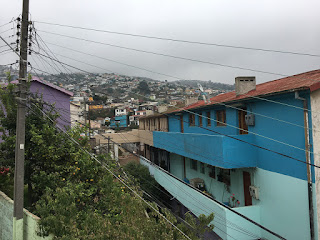 If one gets to the magical city of Valparaiso one must visit the house of the famous Chilean poet Pablo Neruda, known as La Sebastiana. This 5-story creation is one of the Neruda homes that are now museums in Chile operated by the Fundacion Pablo Neruda. And this home is truly one of a kind, one only an artist and true dreamer could create and live in. There are no photos allowed inside of the house so all the ones above are looking at the exterior and/ or the wide and all encompassing views from its many windows and viewpoints.

Neruda loved to sit in his 5th story study and watch the ships come in and out of port, and considered himself an armchair mariner, calling out the ships as they entered and exited the large bay below is hilltop home. There is a large portrait of Walt Whitman in his study too, as well as paintings of ships and maps of Chile and South America. This room is also so high up that when the wind really blows the whole room sways and it must feel similar to being in a Fire Lookout. He had 2 other homes in Chile that are now also museums, one in Santiago and the other on the coast of Algarrobo known as Isla Negra. I still have not been to the Isla Negra home, which was supposedly his favorite and also quite a treasure, but I have been to the one here in Valparaíso and the other one in Santiago known as La Chascona. I found many similarities between those two, such as, they both had there own separate eclectic bars and both were made up of a bunch of separate funky rooms and floors connected by terraced walkways or steep staircases.

We love Viña del Mar for many reasons, but also because it is so close to Valparaíso and all that goes on there. Valpo, a little rough around the edges, can seem like a city out of a post apocalyptic punk rock film, but at the same time it also attracts first class tourists from all over the world who want to clamber through the steep streets and eat on balconies overlooking its steep hillsides and funky neighborhoods. And wouldn't you know that gentrification is a problem there too??

Magdalena and I also explored the more rugged and wild side of Valpo when we were last there in January just after our wedding, and we found a Big Sur like coast hidden away from the view of the tourists. A whole new place for us to come back to again and again. Being out on the points over there it feels like your at the tip of the continent, and I wouldn't be surprised if you could spot many species of pelagic birds like Albatross from one of the lookouts there on the right day. I will go out there to find out for myself soon.

Finally, when we want a proper meal out we go to the Cap Ducal, a classy place that many people have seemed to have forgotten about, or perhaps they prefer the more modern and trendy places? We always prefer the traditional and original establishments so of course we love that old ship like structure turned hotel/ restaurant that has been serving quality food and friendly service for decades. I had a proper and delicious Pisco Sour there, and I have had a quite a few lately that did not even come close. I also think that one day there will be a proper left wave breaking right under the window table where we were seated in this photo. I hope to try and surf that wave when, and if it ever does, break. Furthermore, I look forward to having many more romantic dinners there with my new and forever wife.

Posted by anthonybphoto@gmail.com at 11:24 PM