First Summer in the (western) Sierra 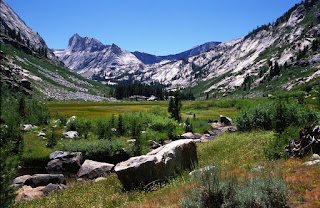 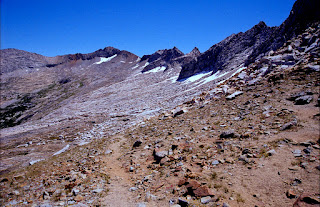 Ranger Meadow and Elizabeth Pass from my first backpacking trip in the summer of 2010. Sequoia and Kings Canyon National Park.

Being away from California and the Sierra this past summer I did not make it up to the Western Sierra, where I have been going every year since 2010 when I first got my seasonal park ranger gig there in Kings Canyon National Park.


I had never been to the west side of the Sierra before I found that job in Kings Canyon, even though I grew up and lived just 3-4 hours away from the Giant Sequoia groves and the famous national parks that protect them. Like many of my friends I was lucky to be able to visit the east side of the Sierras often over the years, but I never knew what I was missing over on the other side. Of course many people prefer the east side due to its scenic and dramatic beauty, as well as the easy access into the high country it allows. On the west side however, one finds rolling savanna like hills eventually leading to some of the most beautiful groves of large Valley Oaks before the hills get steeper and the oaks start to mix with pines. And eventually as you go up the mountain roads and above 6,000 feet, you reach the mixed conifer forest, the finest forest in the West. Made up of Ponderosa and Geoffrey pines, interspersed with White Firs, Incense Cedars, Black Oaks, Junipers, and in some places, Giant Sequoias. This is where I worked, in the Grant Grove district of Kings Canyon NP. And it was there during that first summer in 2010 when I would go on my first backpacking trip.

I had car camped all over California and Baja up until then, and I had hiked plenty too, but I knew nothing about this other world beyond the day-hike. I was fortunate that first summer to fall into a group and meet a whole new cast of characters and friends, whom I would listen closely to as they spoke of the lore of the "backcountry." Their were magic places up there they assured me, tucked between mountain passes, away from the summer crowds. I yearned to know, heck, I was a ranger working the main visitor center there, I had to know. It is not always easy to get into the backcountry while working a seasonal NPS gig. Contrary to popular belief, we did not get paid to go roam around the trails all day, just part of the day.

Eventually, I was ready to get out there and I found my chance. I was told that every ranger was allotted 2 personal development days to work outside of their district, or to go out into the backcountry, on official reconnaissance of course. I decided to take my two days and link them back to back with my two day weekend to come up with four days. I had four days now to test out my new backpack  and lightweight tent that I had just bought down in Fresno at the REI. I had my gear, I was feeling good, and I was more than ready to find out what all my friends had been talking about. As luck would have it, when things work, sometimes they really work, and there's no better feeling when things start to click into place before a trip. It just so happened that a backcountry ranger, Ranger Cindy, was going back out to her station at Roaring River the same day I was heading out. So she offered to give me a ride to the station on one of her horses. Ranger Cindy was one of only a couple of wilderness rangers that still used 'stock' or horses and mules. I was excited to have the chance to work with a wilderness ranger and to get a lift on a horse part of the way.

I met up with Cindy and her horses and mules over off of a long dirt road at the trailhead. She loaded me up on a fairly young horse that would be leading the stock train. I had not been on any kind of horse or four legged animal in quite some time, and I was a little curious to see how things would go as we rode into the afternoon. At one point we were descending one particularly steep pass as a full moon rose over Deadman Canyon. I was able to pull out my old Nikon N90s and take a shot on horseback. After making it to the station in the dark I found a spot in the station to sleep and rest. The next day I would head out alone over Elizabeth Pass and into the Kings Canyon and Sequoia NP Wilderness. When I woke up, Ranger Cindy was making scrambled eggs. This is a lady who took her young son into the backcountry since he was a little baby, and at that time in 2010 she split her time between her home in Utah and the park, and her son was now a teen and still joining her often into the wilderness each summer. After the eggs, I grabbed my pack and headed out to find my first camp.

Not long after leaving Roaring River station I came upon this view (shown above) of Ranger Meadow. Everything around me and the meadow was literally just glowing green. I was alone, I saw a coyote off in the distance, and I felt like I now knew what my new mountain friends had been talking about. There were places out there where one could feel the vibrations of the earth, under the bright sun, with the granite pass ahead, and only you and what you have in your pack to survive. My first night backpacking I found a campsite above a large lake and had to set me tent up next to some recent bear scat, but due to the rocky terrain there we're not many other options. And the scat appeared to be at least a couple of days old, so I summoned that the bear was probably long gone. I spent that first night there, above a glacial blue lake surrounded by steep granite walls, like some wild ancient amphitheater.

The next day I repacked my gear and started up towards Elizabeth Pass. The pass that Cindy had been telling me about, not so bad to hike she said, but to get over and back down with stock was another story. Horse wrecks were not uncommon in the Sierra, and they can cause some serious damage to gear, people, and horses. Having no horses to worry about this day, and having the entire day to myself, it was good to know that it was my own two legs that would carry me and my pack over the pass. Elizabeth Pass is officially where the boundary lines of Kings Canyon and Sequoia meet, and sits at just about 12,000 feet. After hoofing it up and over the granite steps in the full sun I was thirsty and hot as I hobbled down into the Sequoia side of the barren and rocky pass. And again the universe was smiling down upon me. Not long after coming down I found a clear full creek running into a slot like pool. I quickly filled up my nalgene and drank, and then took off all my gear and jumped in their naked, feeling the ice cold water surround my body, out there on that mountain pass I was again feeling the magic that I had hoped existed.

That was the beginning of a relationship with the Sierra that I still can't get over. The day after my season ended that same year, my friend Jason and I got a ride out to the Florence Lake trailhead from a coworker. From there we would go on a 7-day backpacking trip down the John Muir Trail and through the heart of the Kings Canyon Wilderness. It was truly epic. I was able to work in Kings Canyon for only one more season after that, the following year in 2011. I would not go back to work there again because had I reluctantly took a permanent job with the Santa Monica Mountains NRA, meaning that I would not be able to work at Sequoia and Kings the next summer. However, I would find adventure, great work, and so many amazing and adventurous friends at the SMMNRA too. I would also be able to go back and visit my old friends and my favorite places every year after, except this past one. Just two years ago on one of those trips I got engaged to Magdalena, and that moment has set me on the track that I am now following, far away from California. There are still so many places I would like to explore in Sequoia and Kings Canyon and the Sierra, there are so many adventures to dream up and too many sun filled days out there ahead in time when one can imagine doing nothing better than just wondering around the colossal granite wilderness all day. It can drive one crazy thinking about all that space, all that time. All that being said, South America holds a whole new world for us both to discover together. And those rocks in the Sierra, they're not going any where any time soon.
Posted by anthonybphoto@gmail.com at 1:19 PM