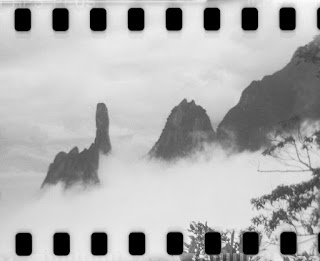 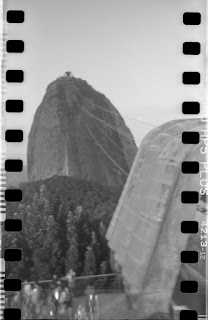 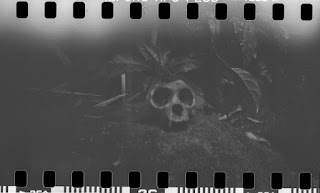 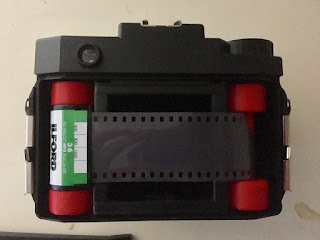 Getting back into the film groove I wanted to try and use my Holga camera that I have had for many years, so I brought it with me to Rio in May for my first visit to that famous city by the sea. I was there for the National Association of Interpretation's International Conference, more on that later, and as part of the conference I was able to attend a couple of field trips to the natural and protected areas around Rio. I brought my modified Holga with me on those trips. I had modified the cheap plastic camera to shoot 35mm film in a camera made to shoot 120 or medium format film. It is made possible by adding a couple of custom pieces (that I bought from randy at Holgamods) that hold the 35mm film canister in place. This allows you to expose the entire film width, including the area around the sprockets, and allowing for a sort of panoramic capture as well. However, like any shot with a Holga you have to guess the exposure and with this particular set up you also have to count the number of clicks or turns of the film knob in order to advance the film and expose the shots evenly.

This was my first time using the Holga in many years, and the first time with this 35mm adapter in place. The results were not groundbreaking in any way but I would give it another try one day for sure.

I visited the Serra dos Órgãos National Park in Teresópolis as well as the Urca Hill and Pão de Açucar in Rio.

Posted by anthonybphoto@gmail.com at 5:34 PM