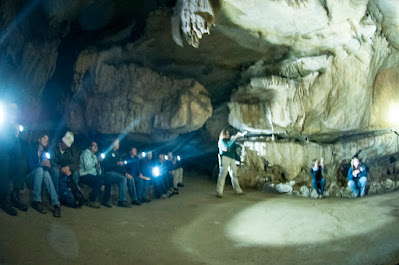 Interpreters searching through the dark towards the light, Crystal Cave Sequoia National Park, 2010

We have tragically lost so many to COVID in 2020, but last week we lost someone incredibly close to the minds and hearts of readers and writers like myself. Barry Lopez succumbed to prostate cancer on December 25th 2020, and with that we lost one of the most gifted and well known environmental writers of the English language. However, to call him an environmental writer is to do an injustice, and I think he can only describe what he really wrote about. Here, in a now famous interview with the great Bill Moyers, Lopez says,

“ I’m not writing about nature. I’m writing about humanity. And if I have a subject, it is justice. And the rediscovery of the manifold way in which our lives can be shaped by the recovery of a sense of reverence for life.”

It is this reverence for life that I recognize in his many stories and writing style. Lopez’ books, such as Arctic Dreams, Crossing Open Ground, and Of Wolves and Men, can be found on the shelves of every naturalist, park ranger, wilderness advocate, and those who appreciate masterful storytelling. In books like Arctic Dreams one can really see this reverence for life he had and shared with us through his storytelling. Among many other disciplines, Lopez weaves together geography, archaeology, sociology, biology, adventure and travel to tell the story of some of the most wild and sacred parts of the planet. He also spent a great deal writing about as he said, humanity, our place in this world and our relations to each other and the plants and animals as well. Lopez lived in Finn Rock Oregon, his house surrounded by wilderness with the Mackenzie river right out in front. Much of the land around his house, including some of his own property and personal archives, was burned in one of the now infamous massive fires that tore through western North America in 2020. He wrote about the fires and their impact on his life recently on his website. I came to know Lopez and his work sometime after I had left college with a literature degree. Then, I had only some vague knowledge of who the heavy hitters were in the environmental lit world. Embarrassingly, I hadn’t even heard of Lopez until my first season working as a naturalist interpreter in Sequoia and Kings Canyon National Park in 2010. When, during an orientation before the busy summer season, I was with a bunch of other new recruits and young interpreters and we got to talking about the literature of the outdoors. One of them said something about Barry Lopez and Edward Abbey hanging out in the 70’s writing about the Desert and Wilderness, ‘two of the best writers ever,’ he casually looked over and said to me as he waited for an approval, or a hell yeah, something. But I didn’t know who either of them were, so I just gave him a slight nod and said, ‘yep, definitely.’

When I got back to my cabin I couldn’t stop thinking about what a fraud I was. There I was, a park ranger, a devout nature fanatic, with a degree in Literature, and I hardly knew anything about two of the greatest writers of the genre. I had heard of Abbey, but I still hadn’t really read any of his works. Lopez, on the other hand, I had to scratch my head, why hadn't I heard of this guy? It was probably due to my narrow minded and half assed approach to Literature and writing at the time. For whatever reason, I was missing out on some of the best works ever made about adventure, travel, place, and the American Wilderness. That summer I decided I needed to upgrade my canon, and that I would get to know these two great American authors. Thinking about it now, it was  just the right time for me to dive in. I had just started my first summer season in that great Wilderness park, it would be the summer that I would be introduced to many things that I never had any relation to before, like Wilderness, with a big. That year I would come to learn where the term came from, how it was managed by the park service, and how to access some of the tens of thousands of acres of it that could be found right there in California’s majestic Sierra Nevada. I started exploring the Sierra at the same time I started to explore the work of Edward Abbey.  I got a copy of the classic Wilderness opus Desert Solitaire right there in the visitor center that I worked in. I devoured it instantly, and became even more fascinated with this idea of wilderness preservation and the need to get out and find yourself deep within it. It would take me a little while longer to finally get into Lopez, but when I did, it was another transformative experience. At this point I had returned to my home park, the Santa Monica Mountains NRA, and was back living in park housing near the small community of Newbury Park in Ventura County. In the public library there, I looked up Lopez and found Arctic Dreams. When I opened that blue book, I was immediately immersed in the immense wilderness and the frozen world of the Arctic with Barry. Around this same time, the whole Arctic National Wildlife Refuge drama had begun, and I had been thinking about that place, up there at the literal top of the world. I felt connected to it, on a level more spiritual, and I saw it as a massive refuge for wilderness itself, a place where migrations of caribou and birds could take place uninterrupted, a gigantic healthy ecosystem that could only be found in such a place so remote and so far away. Reading Arctic Dreams I was able to visit this wild place, and through Lopez’ beautiful storytelling, I was able to understand the magic of the place. That book is perhaps one of the greatest books about place ever written.

Lopez had just recently published his newest work, Horizon, in 2019. It’s a work that I understand spans decades, and is somewhat of a continuation to Arctic Dreams. A book that many of us have long been waiting for, the fact that Barry left it for us so close to his passing, is a special gift. I’m eager to get my hands on a copy. I kept up with Lopez over the years through his role at Orion Magazine, where he was a contributing editor and where his work was featured frequently. Now, we will still be able to keep up with him, because he was a prolific writer, and I still have much to discover from the large breadth of work that he left behind. I think after this year, I am in need of some Barry Lopez. I’m ready to travel with him to the corners of the planet, to the beautiful places, to the damaged places, and to try and understand our place here and how our relations to each other shape the actions we make on this one and only sacred planet. Losing Lopez we have really lost a unique voice in the environmental literature world, a world that has very few modern contemporary voices that can appeal to a large swath of readers. In a recent issue of Orion Lopez shared a piece about a trip he took to the Australian Outback, Lopez wrote,

“In this trembling moment, with light armor under several flags rolling across northern Syria, with civilians beaten to death in the streets of Occupied Palestine, with fires roaring across the vineyards of California, and forests being felled to ensure more space for development, with student loans from profiteers breaking the backs of the young, and with Niagaras of water falling into the oceans from every sector of Greenland, in this moment, is it still possible to face the gathering darkness, and say to the physical Earth, and to all its creatures, including ourselves, fiercely and without embarrassment, I love you, and to embrace fearlessly the burning world?”

Although Lopez lived out in the country, it’s something he said about living in the city that I always think about. In that same interview with Moyers, Lopez talks about being in New York, and as he’s describing the unique kind of blue light found there on a winter day he says that,  “I’ve never had this sense of antipathy towards cities, you know, it’s the best we can do.” That really struck me, and I have never forgotten it. It showed me two things, one that Lopez acknowledges his fortunate place in our world to live in a place such as Finn Rock, and two, that he has compassion for the rest of us. I understood then that the idea, this city vs country argument, is not important. What’s important is that we make sane and sustainable decisions about our homes, no matter where they are. It made me think of just how lucky some people are to live out in the woods, but that yes, perhaps, cities are the best that we can do. For one thing, if we want to preserve open and wild spaces, then we cannot all run to the mountains and start building log cabins. I believe that too often we hear this cliched dualism from many outdoor enthusiasts or nature writers in general, about getting out of the city, and escaping into the wilderness. But of course we know now that this neglects the real situations that most of us all live in. I’m saddened to know that we have lost someone that asks us to think deeply about our place in this world. Barry’s wife Deboarah wrote a moving tribute to her husband on his website, in it she described his last moments and I found this particular passage quite powerful:

We washed him with water from the McKenzie River and wrapped him in a Pendleton blanket.”

Posted by anthonybphoto@gmail.com at 6:44 AM